When the first images of Pioneer DJ’s DDJ-REV7 controller hit the internet, I logged out of my Zoom call and immediately called my local retailers.

Intrigued, I tried to get more information on this unit. I needed to see if it was real, see if the dreaded supply chain would impact availability, and determine if there was a waitlist, pricing, you name it. Turns out, I had to wait, but the wait was worth it.

So, I was thrilled when Pioneer DJ finally put a DDJ-REV7 review unit in my hands. This was the first time that Pioneer DJ had released a controller tailored-made for battle DJs, and I had to answer two central questions: Was the hype real? And was this unit finally the white whale so many open-format DJs had been dreaming of?

In this review, we will explore the DDJ-REV7, discuss features with the controller tailored for the open-format/battle DJ, and discuss if this controller is suitable for a mobile jock or house DJ, and if upgrading makes sense.

Let’s first discuss the fact that the DDJ-REV7 does not conform to what has now become the standard controller layout. Most controllers in the market follow a similar design language. Sure, there are differences between manufacturers and software platforms. Still, most controllers have two plastic platters with cue buttons in front of each platter, and a mixer section in the middle, often either supporting or structured for four channels. A central FX control section runs along the mixer section, almost looking like a third/fifth channel, depending.

Well, throw out nearly all that design language for the DDJ-REV7. For those unfamiliar with open-format/battle-style DJ setups with turntables, the turntable rotates 90 degrees counterclockwise to move the turntable arm out of the way when scratching, along with the pitch fader being relocated to the top left of each platter section. Applying the approach to the DDJ-REV7, we see the platters on the left and right, with the pitch faders on the top. Located between the platters and the pitch faders is a series of hot-cue buttons that have dedicated functions in Serato DJ Pro software. Unlike many of Pioneer DJ’s other controllers, which see the hot-cue buttons in front of each platter, the hot-cues/control buttons are located in the mixer section. For those familiar with Pioneer’s battle mixer “S” series, the controller dropped an S7 right in the middle of the two platters. 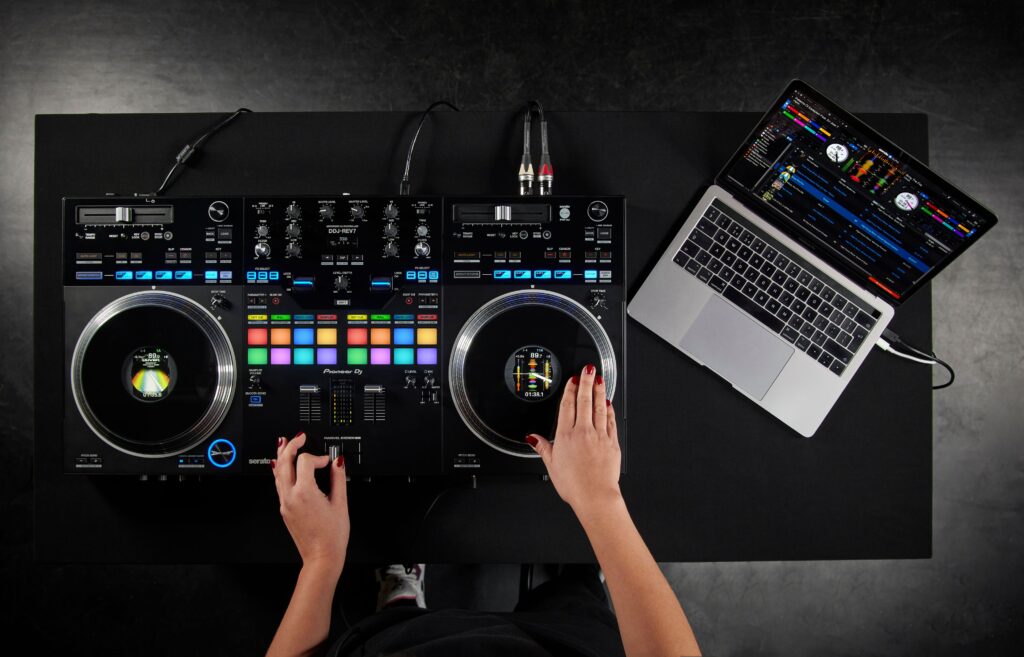 Let me start by saying these platters are incredible. Not only do they look like mini-turntables, but they also perform. They are built to last from a construction standpoint, with their core being a metal platter with a familiar dot pattern reminiscent of turntables from my youth.

Like the approach Pioneer DJ has taken with its CDJs, users can adjust the torque to tailor their scratching experience. While seemingly straightforward, Pioneer DJ put two indicator lines on the unit to make returning to “center” clear and more familiar to DJs who would have put tape on their records back in the glory days of vinyl. The only significant difference from traditional turntables is that there isn’t a central pin that I typically used to accelerate/decelerate; in place, you have a pitch fader, pitch-adjuster buttons, and a sync button.

In contrast, it did take me a few sessions to get accustomed to not having the center pin. Having the torque control, tempo sliders, and the beloved sync button made up for the missing feature. The bonus of having track and waveform information in a beautiful bright 3.5-inch LCD screen made me care even less about the lack of a turn knob. With all that visible information within the platter, I found myself looking more at the controller and less at the computer screen. It was a better playing experience and it allowed me to move faster in my transitions. It also enabled me to execute new mix techniques and combos that I had not been able to do with previous controllers.

If I had wish lists on screen functionality, it would include the ability to customize them – in the same way, you could adjust the look and layout of your laptop Serato DJ screen layout for waveforms going horizontal, vertical, or full page. Another possible update would be to treat the screens like an Apple Watch, providing the user the ability to change the layout and the widgets within that layout. The biggest hope is that one day you will be able to see both wave formats in some side-by-side or primary/secondary form to make beat-matching and cue matching easier.

With the DDJ-REV7 being a controller, you are no longer bound to the singularity of moving a piece of vinyl slower or faster to manipulate a track. Thanks to the section of hot cues and track manipulation buttons, you have an instant scratch button section, sampler bank, and loop/auto loop buttons. While I did use these from time to time, I found myself gravitating to the button section within the mixer and wondered if I had the review unit for longer would my opinion have changed.

All Pioneer DJ devices that I have come across use a three-button system for looping, comprised of “auto loop,” and “1/2x,” and “2/x” buttons. I would much rather have seen Pioneer DJ transition away from this format and move to an encoder button that would replace the loop buttons and allow the user to increase and decrease the loop size or activate or deactivate the loop. I find this workflow more intuitive and easier to manage and manipulate.

For those who have used Pioneer DJ’s battle-style mixers – like the DJM-S5, DJM-S7, or the DJM-S11 – the mixer section of the DDJ-REV7 is comprised mainly of the same attributes found on the DJM-S7 with a few tweaks here and there. As someone who has primarily played on Pioneer DJ’s DDJ-1000 or traditional turntables with a DJM-800 and an extra MIDI controller to control cue points, I was pretty fired up to check out how my workflow would change with the performance pads section now located above the crossfader – as opposed to below the platters like on my DDJ-1000 or a separate control unit when using my traditional DJ set-up. Not to mention, it’s a completely different approach to FX, compared to my DJM-800.

Let’s first start with the performance pads. In contrast, there are various ways to use the performance pads’ roll, saved loop, and sampler. I tend to stick with hot cues and use them not only for track beat-matching, but also to find them easier to jump around the track and not always have the following way coming in at the start. These pads in the middle of the set-up made beat-jumping, quick-cueing, and general mixing much more manageable. They felt more intuitive, especially when trying to quickly go between two tracks.

Above the performance pads sat the FX section, comprised of six pre-set buttons, a mini screen, FX parameter adjustment buttons, filter knobs, and FX on/off/lock-on switches. I came from mixers and controllers that utilize a button to activate/deactivate the FX with a knob to control the depth, so I was most interested in how I would like the switch approach to FX control.

To say it was my favorite feature of the whole device is an understatement – it was by far my favorite feature to use. I found the workflow – from jumping from the various six FX buttons and manipulating the FX parameter with the two up/down buttons and associated screens – to be straightforward to learn and use. The ability to manage both tracks simultaneously with the FX controls felt way more intuitive than a button-knob combo. The fact that the filter knobs are located nearby made track manipulation more accessible and faster, perfect for battle DJs moving with speed and precision.

Before getting the unit in my hands, I was a little concerned with size and weight. I had been using the DDJ-1000 for some time and figured that the DDJ-REV7 would be heavier, purely because it had the motorized platters vs. the plastic build of the DDJ-1000.

Sure enough, I was correct in assuming the weight (23.5 pounds) was more severe than my 1000. Still, for a guy who can barely do five push-ups, I found carrying it in a soft case was not a big deal, and the size is nothing too significant when you compare it to what is in the marketplace.

As someone who has used pretty much every version of Serato and its associated controllers, I have to say this has been by far the most fun I have ever experienced with a controller. From top to bottom, Pioneer DJ’s DDJ-REV7 checks almost every box. For the first time in a long time, I felt I was doing a different type of beat-juggling, using long-standing favorite FX in new ways, and exploring some of the more unique FX features.

I played a handful of house sets with the DDJ-REV7 and, while there wasn’t the same number of FX compared to other DJM mixers, I found that having the turntable-style mixing resulted in me playing longer transitions and brought me back to the good ol’ days of vinyl and start-to-end-of-night sets.

Overall, it had every bell and whistle a battle DJ or open-format jock would want. At $1,999, the unit might not be the right financial fit for everyone. But, when you break it down with the fact you are essentially getting two turntables, a DJM-S7, and added hot cue, it is one loaded controller with everything you need, and nothing you don’t.

Add in the fact that it’s a built-for-Serato unit makes adoption for anyone familiar with digital DJing easy – it’s a seamless transition. For Serato DJ users, it brings everything into a purpose-built unit, ready to perform and battle.

Shape Up Your Site: Tips on Using Google Search Console