It’s hard for me to fathom that it was over two decades ago at this point, but I still vividly remember the enormous challenges that I had in trying to learn a DAW – that’s digital audio workstation software, although that’s not the term that was really used back in the day.

Then, as now, all the leading software seemed to share the same fundamental concept of multiple tracks, arranged on a timeline. You started the software, and there in front of you was this blank slate with dozens (or hundreds) of switches and dials and knobs and buttons and lines and boxes covering the screen. With no clear path for a newbie to get started, and manuals — actual printed ones, at that point — as thick and dense as a telephone book (remember those?) for a medium-sized city. The fact that I tried three or four different ones along with an utterly complete failure to make anything musical at all shouldn’t have been a surprise, I suppose.

Then, with a hardware purchase roughly 15 years back, along came a CD-ROM for yet another music creation package I’d not even heard of – Ableton Live. It was bundled and free, so why not give it a whirl? Live was different; you started it, but there was no timeline. (Well, it was there, a click away, but it wasn’t its default.)

Instead, Live showed its “session view,” a grid of pads. It didn’t take a lot of tinkering before I figured out what they do, and how to trigger them. Before I knew it, I was making music. Sure, it wasn’t music that’d climb any charts anytime soon, but it was music and better still, I’d successfully created it, and I credit Ableton to this day for making “the” thing that unlocked my ability to be musically creative (although these days, I actually do start with the software’s “arrangement view” and its timeline-centric design.)

While I’m pretty savvy with it all these days, a continuing challenge in music-making is being able to play with ideas in the moment — which often doesn’t occur sitting in front of the Mac in my home studio. Sure, Garage Band and a zillion other things have come along with solving that problem in-mind, but the issue has always been: How do I get any of that (easily, anyway) into Ableton Live to develop it further?

Ableton might have been late to this particular party, but they have now arrived, in the form of Note — its new app to solve this very problem, in a very Ableton-esque way. Spoiler alert: It was worth the wait.

The very idea of Note is to craft and document musical ideas anytime, anywhere — or at least anytime and anywhere you have your iPhone or iPad with you. (For me, anyway, that’s all the time, and everywhere. But Android users take note: There’s no Note for you.)

I think Note is best envisaged as Live’s session view, just repackaged in the form of an iOS app, but slimmed down and morphed a bit — both in terms of the user interface, as well as the underlying content. But saying that is probably not fully accurate, as Ableton has crafted a very capable app, which may well in fact be too capable.

Having been in software development and product management myself a few times in my career, I can barely wrap my head around how I’d scope out the functionality of an app like this. Where, exactly, do you draw the line? Do you make something so simple its utility is questionable, but it’s easy and quick to use? Or do you make something with depth and breadth, but then has a steep learning curve and an interface that makes it difficult to fulfill its mission? I don’t know that Ableton Note is fully one or the other. 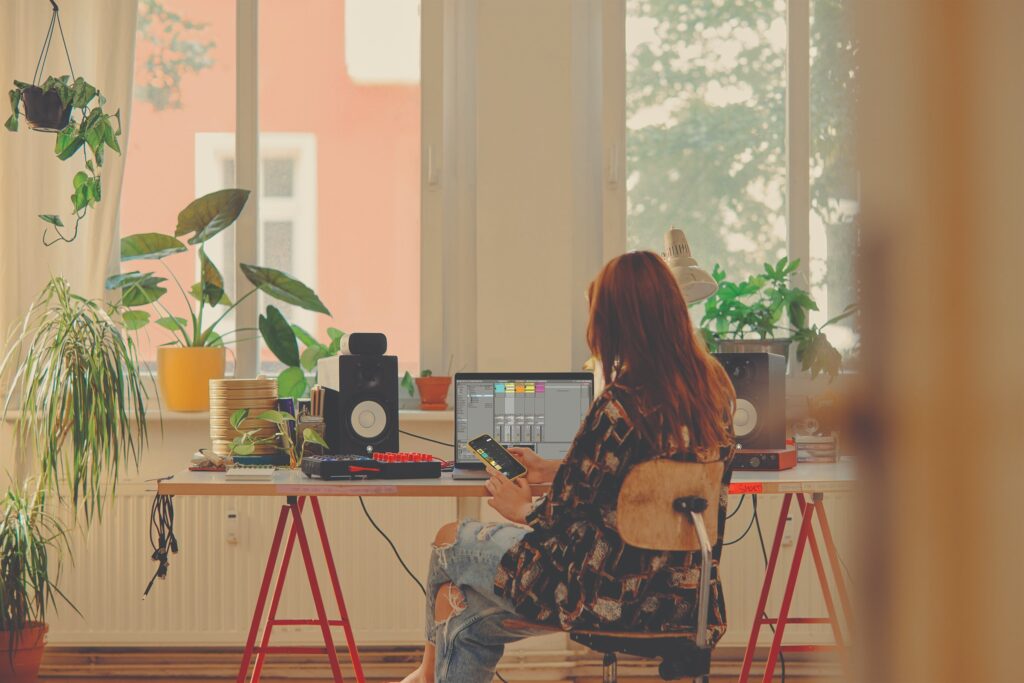 While Note is, design-wise, very well-aligned with Live and with Ableton’s own Push hardware controller (and thus, will quickly feel somewhat familiar), Ableton has packed a lot of “stuff” in and around the corners and edges that isn’t necessarily intuitively obvious. Much of this, I think, reflects the fact that with an app on a mobile device, the screen real estate (especially on the iPhone) is limited, and the user-experience paradigms are quite different.

What that means is that you’ll spend a considerable amount of time experimenting — and making mistakes and/or getting frustrated — or you’ll need to invest some actual effort in viewing Ableton’s walkthrough video for the app. I chose the latter, but it also meant pausing the video for long periods as I went off and attempted to tinker with whatever the presenter was demonstrating.

Ableton capped the projects in Note to having up to eight tracks each with up to eight clips, arranged over eight scenes. That’s plenty to not just sketch out musical ideas, but to actively develop them. Ableton has also included a comprehensive sound library; while not infinite by any means, there are plenty of samples, drum kits and presets — sufficient to cover a wide range of electronic genres. Depending on your musical style, you may not find everything you want precisely, but it’s more than adequate to sketch out musical ideas. And if it’s not enough, you can even record audio through the device’s microphone, and using a limited, but useful array of controls, you can tailor and shape the samples in a range of interesting ways.

But where Note really shines is its native ability to move your projects to the full Ableton Live intact and complete — much as you can open Garage Band projects in Logic Pro. That’s truly what Note was designed for: Enabling you to capture the essence of your creative ideas when your muse strikes, anytime and anywhere, and then develop them freely at a later time, using the full Live platform.

About the only downside of Note isn’t really anything to do with Note itself – it’s the hardware it’s running on. Sure, it installs and scales nicely on an iPad, which solves some of the issues. But if Ableton’s promotional videos are to be used as a model, Ableton designed it with the iPhone in mind, and even the biggest iPhones don’t have a screen large enough to make manipulating things particularly easy.

By modeling the interactions in large part on the design of the Push, however, Ableton has made the most of the limited space. The concept of creating beats with pads has been around for a very long time indeed, so that’s not so much of an issue. But, for me personally, tinkering with melodic ideas on anything other than a standard keyboard controller with its conventional, piano-key-like arrangement is always going to be a big stretch outside of my comfort zone. For melodic input, Ableton used the same methodology they settled-on for the Push; a piano keyboard it isn’t, but it does work, and has some interesting side benefits for creating interesting, in-key patterns due to its unique layout.

Apart from the learning curve and taking the time to really let the UI sink-in fully, I think Ableton has done an amazing job packing a whole lot of capability into a small, affordable package — one that adds considerable value to owning Live. And as a long-time Live user? Well, I look forward to finally being able to expand my creative universe to a world well outside of my home studio.